Back in 2012 (August 16th, to be precise) I wrote an essay about finding the original Rancho Los Feliz adobe house in Griffith Park, where it's now used as a ranger station. This quaint little adobe (which is a reconstruction and may even have been moved north from its original location closer to the Mulholland Fountain) was the end of a treasure hunt for me, because of its importance in the story of Petranilla de Feliz, who supposedly (in 1863) cursed the land that is now Griffith Park.

That story obsessed me from the time I first discovered it, but that wasn't my first obsession with the folklore of Los Angeles. That happened back in the early 2000s, when I was researching The Halloween Encyclopedia. During one of my frequent visits to the Los Angeles Public Library's website, I noticed a small mention buried at the foot of the home page about "lizard people" (they redesigned the site some time ago, so don't go looking for that mention). Huh? What was this doing on the LAPL main page?

Of course I clicked the link, and it took me to a page that included several strange stories from L.A.'s past, especially one of a race of lizard people who supposedly lived beneath Los Angeles in a series of tunnels lined with gold tablets. According to one report, there was an entrance to the tunnel system somewhere in the basement of the library (this was also before a fire destroyed much of the library and it was extensively rebuilt).

Well, I was all over this. Lizard people?! Secret tunnels full of gold right under my hometown? I started researching the story more, and found it went back to a real guy named G. Warren Shufelt, a 1930s engineer who claimed to have created a device that used radio waves to locate anything. Shufelt enrolled the services of a "Hopi Indian Chief" who came with a map of the lizard people's tunnels, and together they actually got a permit from the City of L.A. to start drilling in search of the gold. Believe it or not, the city actually thought they were going to get a cut of this magnificent haul. 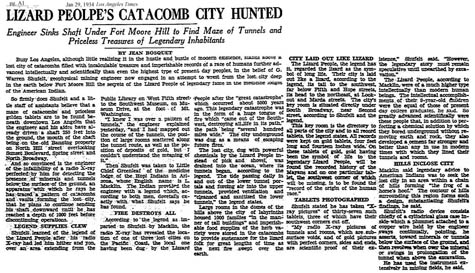 Needless to say, Shufelt never found gold and mysteriously vanished a short time later...but my interest in L.A.'s stranger side didn't. I started looking up more of our local folklore, and was amazed at how rich and deep it was. Catwomen called "La Japonesa" roamed the hills above El Monte; Lake Elizabeth was home to a monster; the ghost of Joaquin Murrieta haunted the arroyos of Pasadena.

Of course this incredible panoply of local legends began to find its way into my fiction. A story about "La Japonesa" appeared in Monsters of L.A. The lizard people confront my heroine in Netherworld, and also appear in my novelette The Lower Animals.

But it was the story of Petranilla de Feliz I thought about the most. I began to realize that tale was too good for a mere short story; it merited a novel.

I wanted the novel to be contemporary, though. And I wanted it to be specifically about what I'd come to think of as the secret history of Los Angeles. It would use all of this lunatic background that few Angelenos knew about. It would talk about Petra, and about Griffith J. Griffith, who did time for trying to murder his wife, and it would even go all the way back to the Gabrielinos, the people who lived here before the Californios arrived in the nineteenth century.

Eventually all of this folklore coalesced with other themes I wanted to develop - healing versus destruction, the nature of magic - into a novel that I originally thought of as Witch. It would be about a psychically gifted but psychotic young woman who would invoke the spirit of Petranilla de Feliz and ally herself to one of the darkest tales in L.A.'s early history. It would be about a folklore professor named Sam West who is writing his magnum opus, and of course that work would be called The Secret History of Los Angeles.

Eventually the book was finished, and I realized the title was wrong. I chose Malediction to reflect the curse at the heart of the novel.

The book was published in October by Evil Jester Press. I am still amazed that it was finally finished and at last saw the light of day. And I remain very proud of it.

Am I done with L.A. folklore now? Probably not. I've never even gotten into the city's haunted twentieth century, when it became a town centered on an industry of (frequently devastating) dreams. I'm about to start a non-fiction book on ghosts, and I have no doubt that what I unearth about haunted Hollywood will find its way into a future book. That's the great thing about folklore: There's always more treasure to dig up. 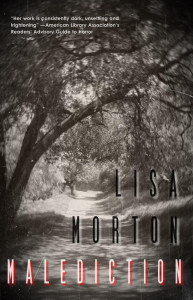 Malediction is available at Amazon in print and e-book
Collapse